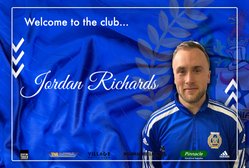 Curzon Ashton Football Club are delighted to announce the signing of Jordan Richards from Farsley Celtic. The 28-year-old links up with his former manager, Adam Lakeland, at the Tameside Stadium having played under him for three years at the Celt Army.

Richards started his career in the youth ranks at Hartlepool United before breaking into the first team and making 77 appearances for the Pools. Richards then enjoyed subsequent spells at Alfreton, Darlington and AFC Fylde before joining Farsley in the summer of 2019 becoming an ever present in his time in Yorkshire.

Upon joining the club, Richards expressed his excitement at joining the Nash and was keen to work with the Curzon manager Lakeland again:

"I’m delighted to be on board at Curzon Ashton. Everything about the club both on and off the pitch is really positive and I’m looking forward to be a part of that."

"When the opportunity arose, straight away I knew it was something I wanted. Having previously worked with the manager I know what he expects and the high standards he sets."

"The team have had a great start to the season, and if we can string a run of good results together, the play offs is a very achievable aim. I’m sure with the quality in the squad and the belief around the club that can be made possible."

"Overall I’m really excited for a new challenge and can’t wait to get started at Kettering this weekend."

Richards will be available to make his debut in tomorrow's National League North game away at Kettering Town tomorrow. You can catch your first glimpse of our new signing at home next Saturday when we host Chester in the league. You can secure tickets for the game using the link below: