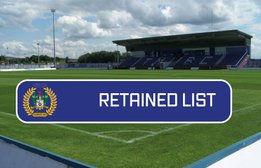 The following player/s have been offered new terms:
Scott Wilson

The following players have been released at the end of their contracts and the Club would like to thank them for their efforts and wish them well in the future:
Jack Dunn
Adam Thomas
Matthew Waters
Dale Whitham

We would also like to thank and offer our best wishes to the following players who were with us on loan at the end of 2021/2022 and will now return to their parent clubs:
Connor Dimaio
Luke Mariette
Joseph Nolan
Connor Teale